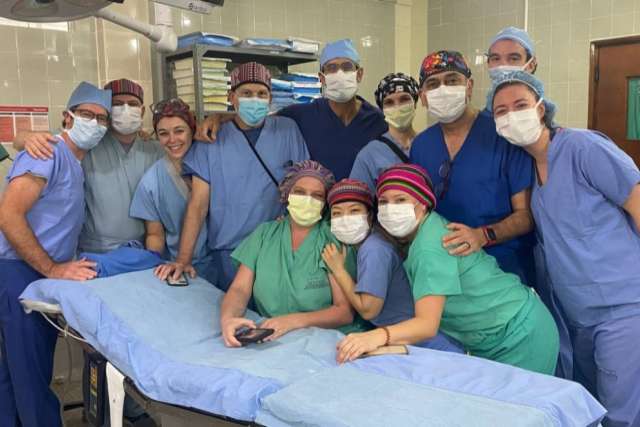 The 1-year-old girl had fallen into the family’s fire pit in a tiny Guatemalan village, severely burning her jaw, neck and upper chest. As the skin healed, it fused together, leaving her neck completely immobile and her mouth barely able to open an inch. At age 12, she finally received surgery and skin grafts that would allow her to move her neck for the first time in more than a decade.

The 19-year-old young man had spent his entire life with a birth defect most children in the United States have repaired when they’re 3 months old. His cleft lip and cleft palate was so extreme, doctors wondered how he’d been able to eat or speak. He received life-changing surgery to restore his mouth’s function and appearance.

These were just two of the more than 50 procedures a multidisciplinary team of UCLA Health surgeons, doctors and nurses completed during a week of service in the Guatemalan village of Nuevo Progreso, a remote area a seven-hour winding bus ride from Guatemala City. 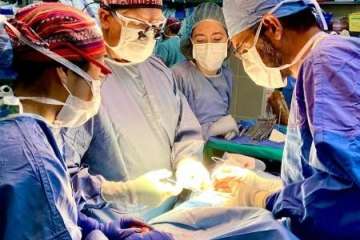 A multidisciplinary medical team comprised of members of the Department of Surgery and Department of Anesthesiology and Perioperative Medicine, led by Dr. Reza Jarrahy, performs a procedure on a patient in the Guatemalan village of Nuevo Progreso. (Photo courtesy of Brianna Ortbals, CRNA)

“It’s really health care delivery in its most pure form and its most simplistic form,” says Reza Jarrahy, MD, a pediatric craniofacial plastic surgeon. “Making a diagnosis, rendering a treatment, and in these settings, delivering that care to the people who need it most and have the least access to it, and making an impact and trying to help them in sometimes simple ways – that’s incredibly, incredibly rewarding for us to do.”

Dr. Jarrahy has made at least 20 trips to Guatemala to volunteer his services, but this was his first trip with an all-UCLA Health team.

“It was an incredibly powerful gesture that a bunch of people from UCLA — which is an institution that more and more is coming to pride itself on upholding the values of equity — is actually delivering, and delivering equity, through health care to these populations,” he says.

Like Dr. Jarrahy, Dr. Borna has volunteered for many medical missions overseas.

“When I see the smile on these kids’ faces, or the parents — especially the parents — because these people really need the help,” Dr. Borna says. “And even if the outcome is not clear immediately after the surgery, we know that whatever comes out of it is 100 times better than what it was before. That’s worth thousands of dollars for me, and that’s what keeps me going.”

A remote hospital at the center of the community

In a town with few paved roads and little infrastructure, Hospital de la Familia has been the center of health care in Nuevo Progreso for more than five decades.

A rudimentary building, the hospital is anchored by a four-bed operating room. 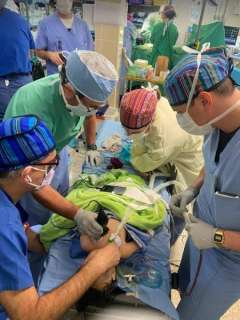 “It was an incredibly powerful gesture that a bunch of people from UCLA — which is an institution that more and more is coming to pride itself on upholding the values of equity — is actually delivering, and delivering equity, through health care to these populations,” says Reza Jarrahy, of the team's trip to Guatemala. (Photo courtesy of Brianna Ortbals, CRNA)

“Sometimes there are four patient surgeries going on at the same time in immediately adjacent beds,” Dr. Jarrahy says.

There’s a small emergency room and two patient wards: one for children and another for adults, with women on one side and men on the other.

The hospital employs physicians and local surgeons year-round, but they can only perform procedures under local anesthesia, which limits the types of surgeries they can do. Volunteer physicians and surgeons visiting from overseas perform more complex surgeries — though these procedures might be considered routine in the U.S. — working side by side with the local medical team.

“Even though we're foreigners, there's a sense of trust,” Dr. Jarrahy says. “Because we're working in a place where people have come to for health care for years, and have received committed care and trusted care from the local physicians, whom they see us working with closely.”

The operating room at Hospital de la Familia has received supplies and donations over the years that make it functional and efficient for visiting surgeons, he adds.

“It’s actually a pretty well-equipped operating room,” Dr. Jarrahy says, “to the extent that either someone like myself or Dr. Schmit can achieve the same surgical outcome in that setting as we do in our best in the West, super high-tech health care facility” in Westwood.

A chance to bond

The medical team from UCLA Health stayed across the street from the hospital. The WiFi connection was spotty, which meant streaming and surfing was out of the question, Dr. Borna says, so the volunteers spent their evenings together chatting.

Each night, the team would gather and plan for the next day’s cases.

Many of the patients were between the ages of 6 months and 6 years, Dr. Borna says, with adolescents and adults also in the mix. Most of them traveled many hours to reach the hospital to be treated for ailments they’d suffered for years.

“He was walking like that for three, four, five years,” the doctor says. “Imagine being able to walk with a watermelon between your legs. And I’m 100% sure that, the day before his surgery, he was still working.”

In the U.S., “when a hernia the size of a blueberry becomes the size of a grape, we’re in the surgeon’s office the next day,” Dr. Borna says.

And the volunteers say they can’t wait to go back and do it again.

“The people are so amazing and so lovely and so grateful, and I always sort of turn the gratitude back on them,” Dr. Jarrahy says. “They’re thanking us for coming, and I’m thanking them for trusting me and giving me the ability to contribute.”