What is acid reflux/GERD?

The official definition of gastroesophageal reflux disease (GERD) is a condition that develops when the reflux of stomach contents causes troublesome symptoms and/or complications. While everyone has some degree of reflux, which is termed “physiologic” reflux, pathologic reflux is associated with symptoms that cause the patient distress or discomfort.

The most common cause of GERD is the inappropriate relaxation of the lower esophageal sphincter (LES). Normally, the LES relaxes in response to a swallow, but in many patients with GERD, the LES spontaneously relaxes even when the patient is not drinking or eating, providing many opportunities for gastric contents to enter the esophagus from the bottom up. Another common mechanism is due to a chronically low pressure at this “valve” that separates the esophagus from the stomach. Additional factors that can lead to GERD include poor motility of the esophagus which can allow physiologic reflux to persist in the esophagus for prolonged periods of time and delayed emptying of the stomach (gastroparesis) that increases the chance of gastric contents backwashing into the esophagus because they have not moved forward into the small bowel. Physical factors that increase the risk for GERD include obesity, pregnancy, and the presence of a hiatal hernia. Behaviors associated with an increased risk of GERD include tobacco and alcohol use, use of medications that can reduce LES pressure, consumption of large meals (especially before bedtime) and eating certain foods (caffeine, chocolate, peppermint or fatty foods). 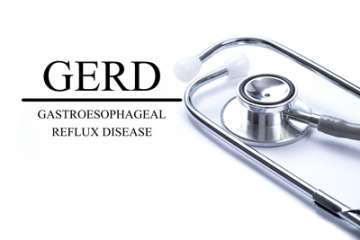 What are the symptoms of acid reflux/GERD?

The classic symptoms of GERD include heartburn (a burning pressure usually under the sternum or breast bone) and regurgitation (a feeling of backwash of stomach contents into the chest or throat). Other symptoms can include a chronic cough, hoarse voice, sore throat and asthma. These latter symptoms are often referred to as “supraesophageal symptoms” because they occur above the esophagus and usually involve the throat, vocal cords or lungs. Additional symptoms can include dysphagia (trouble swallowing with a feeling of food/fluid getting stuck), odynophagia (pain with swallowing), chest pain, water brash (sour taste in mouth associated with regurgitation), globus sensation (a feeling of fullness in the throat or chest) and nausea.

How is acid reflux/GERD diagnosed?

Acid reflux/GERD can be diagnosed by having classic symptoms such as heartburn that respond to standard medical therapy. Formal testing via esophageal pH testing using a Bravo catheter or an impedance catheter can objectively quantify the frequency and duration of reflux episodes. In addition, these tests can determine in what position and when reflux episodes occur and how well these event correlate with the patient’s symptoms. Esophagitis seen on an endoscopy can also serve to confirm the diagnosis of reflux, but endoscopy is generally not recommended as a test to diagnose reflux as most patients with GERD will not have endoscopic features of esophagitis at the time of endoscopy. However, it may be indicated to assess for Barrett’s esophagus in patient with multiple risk factors for the disease, to assess a lack of response to standard medical therapy for GERD and to evaluate “alarm” symptoms such as dysphagia, odynophagia, GI bleeding or weight loss. Radiology studies (barium swallow) and esophageal manometry may also provide information to diagnose GERD but are usually not needed to make a diagnosis.

What are the treatment options for acid reflux/GERD?

Treatment options for GERD can include lifestyle modifications (weight loss, modification in diet and time of meals, positional changes during sleep), the use of medications that primary reduce acid production by the stomach (Histamine 2 receptor antagonists and proton pump inhibitors) and endoscopic (transoral incisionless fundoplication) and surgical procedures (fundoplication, LINX) that primarily aim to tighten the barrier between the esophagus and the stomach. Surgical procedures can also correct any hiatal hernias that may be present.

Watch a video on "GERD: Evaluation and management of acid reflux"