The cricopharyngeus muscle is located at the junction of the pharynx (throat) and esophagus, and is the major muscular component of what is called the upper esophageal sphincter (UES). At rest, the UES closes the passageway between the pharynx and esophagus. It protects the airway and lungs from damaging stomach contents that might be refluxed up through the esophagus into the throat. When something is swallowed, the cricopharyngeus relaxes and opens allowing what was ingested to be swept from the pharynx into the esophagus. 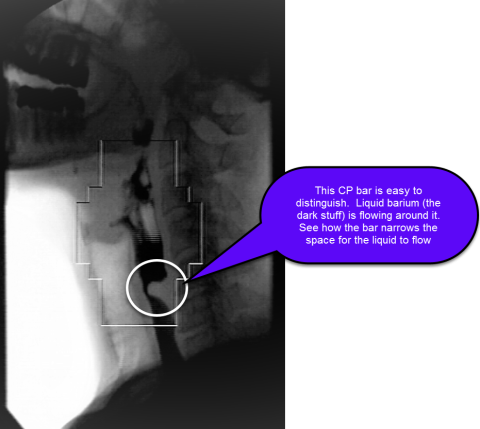 The cricopharyngeal (CP) bar can form from a thickening of the cricopharyngeus muscle caused by replacement of its muscle with fibrous connective. This is thought by many to be a reaction to chronic reflux of stomach contents into the esophagus. Fibrosis makes the muscle stiffer so that it does not open fully during swallowing; thereby, obstructing flow into the esophagus, and increasing pressure in the pharynx during the swallow. The CP bar can also be present in neurologic disease when the muscle relaxation does not function properly. The most common symptom produced by the CP dysfunction is pharyngeal dysphagia (the sensation of food getting stuck in the neck within about a second of swallowing). When severe, patients might have weight loss or even aspiration of food that is not cleared from the pharynx.

How is cricopharyngeal bar diagnosed?

Diagnosis of the CP bar is made with fluoroscopic swallow study of the pharynx and proximal esophagus, typically in the lateral view. The bar appears as an indentation on the barium column at the posterior aspect of the esophagus between the C3 and C6 vertebral levels (see figure).

What are the treatment options for cricopharyngeal bar?

Treatment of the CP bar depends upon symptoms. If the patient is no symptoms, no therapy is needed. Symptomatic bars can be treated with dilation or myotomy. Dilation can be accomplished with Savary dilators passed over a guide wire or through-the-scope balloon dilators positioned visually at the time of endoscopy. While safe and effective, dilation does not produce a durable relief of dysphagia in up to half of patients. Cricopharyngeal myotomy can be performed via open neck surgery through a left cervical incision to expose and transect the muscle, or with an endoscope to identify the thick muscle and cut it with a laser. While both procedures have a high rate of success, and improve pharyngeal and UES function, the endoscopic approach has gained favor in recent years

Chronic obstruction caused by a CP bar can lead to a Zenker’s diverticulum.