What is esophageal cancer?

Esophageal cancer is a malignant disorder arising from anywhere within the esophagus. It can be divided anatomically based on the location; esophagus (proximal or distal), or gastro-esophagus junction (GEJ). These diseases can also be divided pathologically; squamous cell cancer of the esophagus, adenocarcinoma of the esophagus/gastro-esophagus (G-E). These variants appear differently pathologically and new research is emerging that although all of these diseases may arise from the upper GI tract, they are in fact very heterogenous in their clinical behavior. While early detection of these cancers has been proven to be of clinical utility and is currently indicated for some patients with a strong family history or genetic predisposition, there are no routine screening recommendations for cancers of the esophagus. 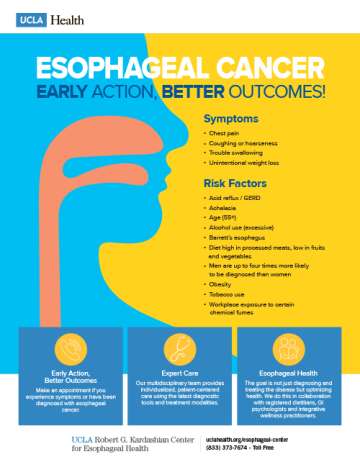 Squamous cell carcinomas (SCC) occur most often in the proximal two thirds of the esophagus. Although this cancer has decreased in incidence in the United States, it is still the most prevalent histologic subtype in the world. SCC of the esophagus has been linked to tobacco smoking and/or excessive alcohol abuse. Cigarette smoking and alcohol appear to act synergistically thus producing high relative risks in heavy users of cigarettes and alcohol. Adenocarcinoma of the esophagus cancer most commonly occurs in the distal esophagus and gastro-esophagus junction (GEJ). Over the last 30 years, it has become much more common that SCC of the esophagus. While smoking may be a risk factor for this subtype as well, alcohol has not been linked. Barrett’s esophagus (metaplasia of the distal esophagus) and GERD (gastroesophagus reflux disease) have emerged as risk factors for this disease and screening recommendations for these patients have been proposed.

What are the symptoms of esophageal cancer?

Both adenocarcinoma and SCC have similar clinical presentations except that adenocarcinoma arises much more commonly in the distal esophagus/GEJ. Most patients present clinically with dysphagia (difficulty swallowing), odynophagia (pain on swallowing) and weight loss. These symptoms can occur in the case of both solids and liquids. This is because the majority of patients present with locally advanced esophageal cancer which manifests as obstruction of the esophagus by the tumor causes progressive solid food dysphagia often accompanied by weight loss. This usually occurs once the esophageal lumen diameter is less than 13 mm, which indicates advanced disease. Weight loss is due to dysphagia, changes in diet, and tumor-related anorexia.

Early symptoms of esophageal cancer are subtle and nonspecific. Transient "sticking" of apples, meat, hard-boiled eggs, or bread, which can be easily overcome by the patient with careful chewing, may precede frank dysphagia. Patients may also notice retrosternal discomfort or a burning sensation.

Regurgitation of saliva or food uncontaminated by gastric secretions can also occur in patients with advanced disease. Aspiration pneumonia is infrequent. Hoarseness may occur if the recurrent laryngeal nerve is invaded.

Chronic gastrointestinal blood loss from esophageal cancer is common and may result in iron deficiency anemia. However, patients seldom notice melena, hematemesis or blood in regurgitated food. Similarly, acute upper gastrointestinal bleeding is rare and is a result of tumor erosion into the aorta or pulmonary or bronchial arteries.

Tracheobronchial fistulas are a late complication of esophageal cancer. The fistulas are caused by direct invasion through the esophageal wall and into the main stem bronchus. Such patients often present with intractable coughing or frequent pneumonias. Life expectancy is less than four weeks following the development of this complication

How is esophageal cancer diagnosed?

Most early (superficial) esophageal cancers in the United States are detected serendipitously or during screening for or surveillance of Barrett's esophagus. Regardless of the subtype, esophagus cancers are diagnosed by endoscopy and pathological confirmation in the same way. Staging of this disease is critical to determining the appropriate therapies. Endoscopic ultrasound (EUS) is both very sensitive (>90%) and specific at establishing the depth of tumor invasion (T stage) but less accurate in determining nodal involvement (N stage). CT scans of the chest, abdomen and pelvis are mandatory to assess both local involvement and more importantly the presence of distant metastasis. The pattern of metastasis is different between SCC and adenocarcinomas with the former often having lung involvement and the latter involving more abdominal organs. PET scans have now been well validated improving both the sensitivity and specificity of staging in this disease and are now widely considered part of the standard of care for this disease. Unfortunately, only 40-50% of patients with esophagus cancer present with clinically localized disease. The 5 year survival is entirely stage dependent with patients diagnosed with Stage I disease (T1N0M0) having >80% 5 year survival, those with Stage II-III (T2-T3, N0-N1) having 15-30% 5 year survival and those with stage 4 (metastasis) with <5% 5-year survival.

What are the treatment options for esophgeal cancer?

Treatment of stage I disease
Most people believe that esophagectomy is the standard treatment for early esophagus cancers. The extent of surgical resection and type of procedure (Ivor-Lewis or transthoracic vs transhiatal) is still a matter of debate. Recently, less invasive procedures such as endoscopic mucosal resection (EMR) and photo dynamic therapy (PDT) have emerged as important tools in the treatment of early disease. However, at this time, for medically fit patients, they are not yet considered the standard of care.

Treatment of locally advanced disease
The management of patients with Stage II and III esophagus cancers is a matter of great controversy and no consensus has emerged despite many years of research. The options for management include surgery +chemotherapy, surgery + chemoradiation or chemotherapy + radiation. Based on several large randomized clinical trials several things are clear: either radiation, chemotherapy or surgery as stand-alone treatments are insufficient. Appropriate patient selection, tumor staging and treatment standardization is required before optimal combinations are established.

Treatment of advanced disease
The goal of treatment under these circumstances is palliation and palliative resection is almost never indicated. Local approached such as radiation or esophageal stent placement could be considered as dictated by symptoms. Combination chemotherapies are the standard of care for these patients and have been shown to improve both overall survival as well as improve morbidities. Optimal combinations for this disease vary based on geography, histologic subtype and co-morbid conditions. Most practitioners consider fluoropyrimidine and platinum agents to be among the most active and the best choice for initial therapies. Other chemo agents with activity include the taxanes, camptothecins and anthracyclines. Unfortunately, this treatment is entirely palliative and the median overall survival despite recent improvements remains.