A diverticulum is an abnormal out-pouching or pocket forming off the wall of the gastrointestinal wall.  A Zenker’s diverticulum is a pouch that forms in the throat at the very beginning of the digestive tract just above the upper esophageal sphincter (UES).

The cause of Zenker’s diverticulum is abnormal tightening of the upper esophageal sphincter (also called the cricopharyngeus muscle). As a result of tightening of this muscle, pressure builds along the wall of the throat above this sphincter muscle. Just above this muscle there is a relative weak point of the throat wall and the diverticulum forms as a result of the relative increased pressure exerted on this weak area during swallowing. Because the UES below the pouch is tighter than normal, food and liquids are harder to pass into the esophagus and instead tend to pass into the diverticulum pocket or even back into the throat causing regurgitation.

What are the symptoms of Zenker’s diverticulum?

Symptoms include difficulty swallowing, feeling swallowed material sticking in the throat, regurgitation, weight loss, bad breath, choking, and coughing. Swallowed material may accumulate in the diverticulum and be regurgitated long after a meal.  Pills may be difficult to swallow.  Some people with a Zenker’s diverticulum may have only mild symptoms but over time the pouch continues to grow and becomes more symptomatic. 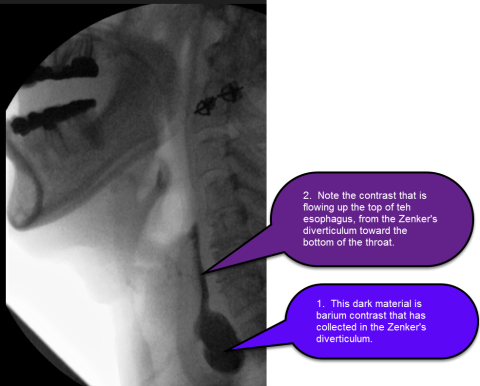 How is Zenker’s diverticulum diagnosed?

Zenker's diverticulum is diagnosed during upper endoscopy (EGD) or esophagram (aka barium swallow), or a modified barium swallow study (aka videofluoroscopic swallow study) (see figure). These tests complementary during investigation of swallowing problems.

What are the treatment options for Zenker’s diverticulum?