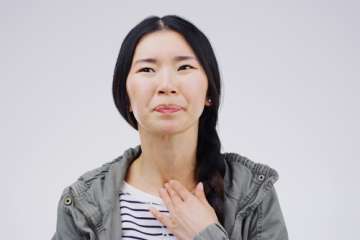 Globus is a constant or intermittent sensation of a lump or something stuck in the throat. It is not painful and usually located between the sternal notch and thyroid cartilage. It is not associated with dysphagia (food sticking when swallowed), or odynophagia (painful swallowing). The diagnosis cannot be made if there are structural, mucosal or significant motility abnormalities of the pharynx or esophagus. Originally, it was called globus hystericus because it was thought to be a psychological problem of women. We now know that not to be the case.

We don’t know for sure what causes globus. It is likely caused by abnormal central processing of peripheral sensory stimuli from the esophagus and/or pharynx. This leads to sensory hypersensitivity like that seen in other functional disorders of the esophagus.

How is globus diagnosed?

The Rome Foundation for functional gastrointestinal disorders published criteria for the diagnosis of globus. These criteria must be satisfied for the previous three months, with the onset of symptoms at least six months before the diagnosis. The symptom must occur at least once a week, and include all of the following:

In practice, it is essential to differentiate globus from dysphagia or odynophagia, because the later entities portend more worrisome pathological processes. All patients with globus should have careful exam of the neck and nasolaryngoscopy to rule out the unlikely presence of a pharyngeal neoplasm. Meeting the Rome IV criteria above requires upper GI endoscopy, esophageal manometry and esophageal pH testing. In general, these tests are best reserved for patients with other symptoms like heartburn, regurgitation, dysphagia, odynophagia, hoarseness, weight loss, or if symptoms persist.

How is globus treated?

Our poor understanding of its cause, and our lack of efficacious treatments make the management of globus difficult. The patient should be counseled that globus is a benign condition, which might persist for years, but usually improves or resolves over time.  Despite a paucity of evidence to support it, a PPI treatment trial may be tried. The patient must understand that PPIs might not be effective, and if so, the drug should be stopped after a 6-8 week trial. Since globus might arise from hypersensitive esophageal sensory pathways, drugs that modulate sensory pathways might be of some benefit. The usual first choice is a low dose of a tricyclic antidepressant. Alternative approaches like relaxation therapy might also be helpful. Finally, if an inlet patch is present and there is a convincing story for it causing globus, it can be removed by radiofrequency ablation.

Watch a video on "Lump in the throat that won't qui: Globus pharyngeus"