What are the symptoms of esophagitis? 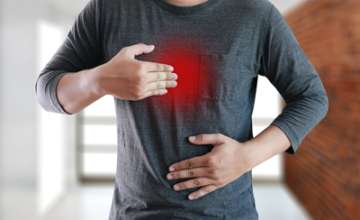 Esophagitis can produce symptoms of chest pain (usually behind the sternum), heartburn, odynophagia (painful swallowing), and/or dysphagia (difficulty swallowing, sensation of food sticking). Rarely, esophagitis can be severe enough to cause bleeding.

How is esophagitis diagnosed?

What are the treatment options for esophagitis?

Treatment for esophagitis varies depending on the cause of the esophagitis. For the common cause of reflux esophagitis, lifestyle changes and medical treatment for acid reflux (e.g. proton pump inhibitor) is used to heal the esophagus by decreasing esophageal exposure to injury from stomach acid.