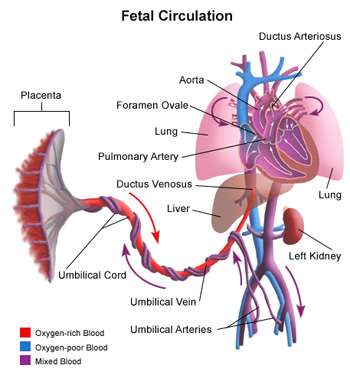 Diabetes is a condition in which the body can't produce enough insulin, or it can't use it properly. Insulin is the hormone that allows glucose (sugar) to enter the cells to be used as fuel. When glucose cannot enter the cells, it builds up in the blood. This is called hyperglycemia or high blood sugar. Damage from diabetes comes from the effects of hyperglycemia on other organ systems including the eyes, kidneys, heart, blood vessels, and nerves. In early pregnancy, hyperglycemia can result in birth defects.

What happens with diabetes and pregnancy?

During pregnancy, the placenta supplies a growing fetus with nutrients and water. The placenta also makes a variety of hormones to maintain the pregnancy. In early pregnancy, hormones can cause increased insulin secretion and decreased glucose produced by the liver, which can lead to hypoglycemia (low blood glucose levels). In later pregnancy, some of these hormones (estrogen, cortisol, and human placental lactogen) can have a blocking effect on insulin, a condition called insulin resistance. As the placenta grows, more of these hormones are produced, and insulin resistance becomes greater. Normally, the pancreas is able to make additional insulin to overcome insulin resistance, but when the production of insulin is not enough to overcome the effect of the placental hormones, gestational diabetes results or there may be worsening of pregestational diabetes.