Approximately 10% of reproductive-aged women have endometriosis.  However, the true prevalence is unknown since the diagnosis requires laparoscopy (a surgery where a doctor looks in the abdomen with a camera through the belly button) to visualize and biopsy endometriosis lesions.  Endometriosis is seen in 12-32% of women having surgery for pelvic pain, and in up to 50% of women having surgery for infertility. Endometriosis is rarely found in girls before they start their period, but it is seen in up to half of young girls and teens with pelvic pain and painful periods.

What Happens When You Have Endometriosis?

Endometriosis can also spread at the time of surgery. For example, a woman with endometriosis that undergoes a cesarean section could inadvertently have endometriosis implant in the abdominal incision so that she develops endometriosis in the scar from the surgery.

Endometriosis is much more common if a close relative also has the disease, so there may also be genes that influence endometriosis.

Why is Endometriosis Associated with Pain? 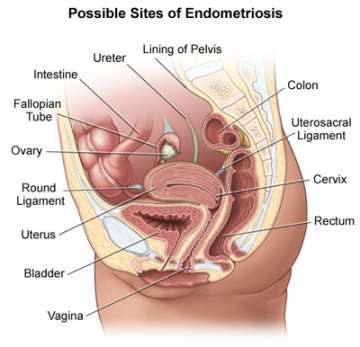 For information about our chronic pelvic pain program >

Why is Endometriosis Associated with Infertility?

Between 20 and 40% of women with infertility will have endometriosis. Endometriosis likely impairs fertility in two ways: first, by causing distortion of the fallopian tubes so that they are unable to pick up the egg after ovulation, and second, by creating inflammation that can adversely affect the function of the ovary, egg, fallopian tubes or uterus.

For information about our fertility and reproductive health services >

Pain is the most common symptom of endometriosis.  Women with endometriosis can experience pelvic or lower abdominal pain, pain with menses (dysmenorrhea), pain with intercourse (dyspareunia) and pain during bowel movements (dyschezia).  Symptoms can be constant or “cyclical,” meaning that they worsen before and during the period, and then improve. Women may have constant pelvic or lower abdominal pain as well. Other symptoms include infertility, bowel and bladder symptoms (bloating, constipation, blood in the urine, or pain with urination), and possibly abnormal vaginal bleeding.

How is Endometriosis Diagnosed?

For information about minimally invasive and robotic surgery >

How is Endometriosis Treated?

The most conservative therapy for endometriosis is with medications. Non-steroidal anti-inflammatory medications, like ibuprofen, may help with the pain associated with endometriosis. Medications that control a woman’s hormones may also help with endometriosis pain. Some examples are oral contraceptive pills and gonadotropin releasing hormone (GnRH) agonists, the latter of which put women into a “temporary” menopause-like state.

If a woman with endometriosis is having trouble getting pregnant, there are different medications and treatments available that can help her to become pregnant.

For information about our fertility and reproductive health services >

How does endometriosis affect fertility and my ability to get pregnant?

Do I need to have a hysterectomy?

No, a hysterectomy is not necessary. However, if a woman with endometriosis is not interested in becoming pregnant, she and her doctor may decide to remove the uterus and possibly the ovaries if other treatments are ineffective.

No, endometriosis is not a type of cancer. Some research suggests that women with endometriosis may be at a slightly higher risk of developing certain cancers. If you are concerned about your risk of gynecologic cancer, please talk to your healthcare provider.

Our fertility services are comprehensive, compassionate and individualized, based upon mutual respect and the needs and preferences of the couple. Find a Fertility Doctor >

For assistance in determining which fertility doctors may have expertise to help you, please call the OB/GYN Appointment phone number:
310-794-7274 | Request an appointment >