Once again, the UCLA Health System's hospitals in Westwood and Santa Monica have been named to U.S. News and World Report's Best Hospitals 2014-15 Honor Roll. UCLA was ranked No. 5 in the country and No. 1 in both California and the Los Angeles metropolitan area. The annual rankings, now in their 25th year, are the magazine's most exclusive rankings, recognizing hospitals that excel at treating patients who need an especially high level of care. This year's Honor Roll highlights just 17 hospitals out of nearly 5,000 nationwide for their expertise in treating the most challenging patients across a range of medical specialties. Gastroenterology and GI surgery rankings | UCLA Health System's rankings

Dr. Sammy Saab, professor of medicine in the division of hepatology and of surgery, was interviewed Dec. 4 on Sirius XM's Doctor Radio about the hepatitis C drug Harvoni.

Diet sodamay alter our gut microbes and raise the risk of diabetes - NPR Segment
Kirsten Tillisch, associate clinical professor of medicine in the division of digestive diseases, was interviewed for a Sept. 17 NPR segment on how diet sodas may alter gut microbes in a way that increases the risk of metabolic diseases such as Type 2 diabetes.

Jewish Daily Forward focuses on Familial Mediterranean Fever
An Aug. 13 Jewish Daily Forward article covered Familial Mediterranean Fever, a rare hereditary disease that reduces the body's ability to regulate inflammation.  Dr. Terri Getzug, clinical professor of medicine in the division of digestive diseases, who is a specialist on the disease, commented on the difficulty in diagnosing the condition and the importance of disease awareness.  In addition, she commented about issues patients are having in obtaining a key medication due to cost and availability.

Dr. Kevin Ghassemi, assistant clinical professor of medicine in the division of digestive diseases, commented in a July 13 NBC.com story about sensitivities to milk substitutes.

Nine UCLA Digestive Disease physicians voted Best Doctors in America for 2014
Best Doctors conducts an exhaustive, peer-reviewed survey of the medical profession, polling more than 50,000 doctors across the country. Doctors are asked to provide an assessment of the clinical abilities of their peers within each of the more than 400 subspecialties of medicine. The millions of individual data points collected through this process, after being compiled through algorithms that correct for statistical bias, yields the list of those physicians deemed "best" by their peers. Continuous peer-to-peer surveys help identify specialists who are considered by fellow physicians to be the most skilled in their fields and most qualified for reviewing and treating complex medical conditions.

Best Doctors objective is to identify the best trained, most experienced and most skilled specialists, regardless of where they practice. Only 5% of the doctors in any country are actually selected to become Best Doctors.

Best Doctors has earned a worldwide reputation for reliable, impartial results by remaining totally independent. Doctors are not paid to complete the survey, and cannot pay to be included in the database. 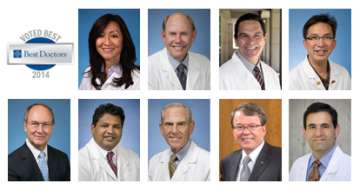 My GI Health: Reimagining the dialogue between patients and physicians
Dr. Brennan Spiegel, associate professor of medicine in the division of digestive diseases, was mentioned May 30 in an article by Medical Marketing & Media on My GI Health.

Helio highlisghts hepatitis C treatment research
Helio reported May 28 on research by Dr. Sammy Saab, professor of medicine in the division of hepatology and of surgery, finding that a sofosbuvir-based regimen showed a reduced number of liver disease complications compared with patients receiving other treatments. The findings were presented at Digestive Disease Week 2014.

Dr. Sammy Saab, professor of medicine in the division of hepatology and of surgery, was quoted April 9 in a Reuters Health story on a study suggesting that a protein called adiponectin that regulates glucose levels and fatty acid breakdown can better predict the risk of atherosclerosis in patients with non-alcoholic fatty liver disease than liver function tests.

Nancee Jaffe, a dietitian with the UCLA Celiac Disease Program, commented in a March 27 Santa Cruz Sentinel article about the trend of gluten-free products and baked goods.

Documentary highlights gut-brain interactions
Arte, a TV network in Europe, aired a documentary in January and March on the relationship between the gut and brain that featured UCLA research showing that ingesting probiotic bacteria can affect brain function in humans. Dr. Kirsten Tillisch, associate professor of medicine in the division of digestive diseases at the David Geffen School of Medicine at UCLA, who directs the neuroimaging core of the G. Oppenheimer Center for Neurobiology of Stress and Resilience at UCLA, was interviewed.

Dr. Kirsten Tillisch, associate professor of medicine in the division of digestive diseases and director of the neuroimaging core at the G. Oppenheimer Center for Neurobiology of Stress and Resilience, commented in Dr. Oz's The Good Life magazine on the role of bacteria in healthy digestion and food sensitivities that may affect the gut.

Dr. Emeran Mayer, professor of digestive diseases, physiology and psychiatry at the David Geffen School of Medicine at UCLA and executive director of UCLA's G. Oppenheimer Center for Neurobiology of Stress and Resilience, was quoted Jan. 26 in a London Times article about the influence of food companies on scientific research.