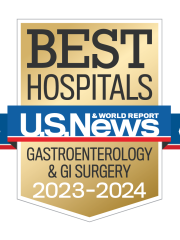 We are pleased and proud to share the news that UCLA Gastroenterology and GI Surgery placed #3 in the nation for the 2022-23 annual U.S. News & World Report rankings.

We are equally proud that U.S. New & World Report recognized our hospitals in the top five in the nation. 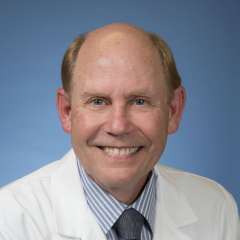 In memoriam - Jeffrey L. Conklin, MD - February 20, 1950 - August 8, 2022
It is with heavy hearts that we announce the passing of our colleague, friend, and mentor, Dr. Jeffrey L. Conklin. We know this news is devastating personally and professionally to so many of us. It is no exaggeration to say Dr. Conklin was a legend in esophageal diseases and a pioneer in testing gastrointestinal motor function. Even more importantly, he was beloved and known for his kindness, humility, warmth, generosity, compassion and the rare talent for bringing people together so that the whole was greater than the sum of its parts.

Dr. Conklin was a giant in the initial discovery phase of how the esophagus works. He undertook ground-breaking studies demonstrating nitric oxide is the neurotransmitter that controls relaxation of the lower esophageal sphincter and peristalsis in the smooth muscle esophagus. That work explored the biophysical and biochemical mechanisms by which nitric oxide exerts its effects. His studies in humans were among the first to support the hypothesis that achalasia results from a loss of esophageal neurons that produce nitric oxide. He was also among the first investigators to provide evidence that interstitial cells of Cajal are pacemaker cells that control colonic motor function. While at Cedars-Sinai Medical Center in Los Angeles, he and his colleagues were among the first to develop and adopt the technology of high-resolution manometry. He coauthored the first and most widely used book describing the clinical use of this technology. Despite his great success and stature in the field, and the impact he had helping countless patients, his greatest professional joy seemed to come from teaching and training the next generation of physicians.

Dr. Conklin enthusiastically instructed fellows, colleagues and investigators and was known as “the guy to learn gastrointestinal motor function from,” winning multiple teaching awards. His knowledge base was intimidating but he presented it in a way that was relatable and intelligible. Former students comment that his comparison of reading motility tracings to mountain ranges is still engrained and used when interpreting gastrointestinal motility testing. This analogy came from his early hiking trips using maps to navigate trails (prior to GPS). Always seeking to inspire, he recently joined Twitter and started #ManoMondays, a peer-to-peer educational series devoted to all things manometry. He described Twitter as a young physician’s platform, but of course he excelled. He successfully created a center of excellence at UCLA that is now poised to take the next step thanks to his efforts.

More than just a clinician, he was passionate about art, culture, gardening and all things creative. He shared music, culinary and exhibit recommendations…and we loved it! No matter his age, he was always young at heart. When away at DDW, he would connect with longtime friends and colleagues during the day, but at night he would hang out with fellows until the early morning hours. Above all, Dr. Conklin was a family man, and he will be remembered as a one who cherished and doted on his wife and  two sons.

Elaine Hsiao, PhD, featured in A World of Women in STEM
Dr. Hsiao, De Logi associate professor of biological sciences and faculty in the Vatche & Tamar Manoukian Division of Digestive Diseases, is interested in figuring out how our gut microbiomes communicate with our nervous systems. Her lab is exploring and probing the gut-brain connection with the hope that one day, we might be able to treat complex brain disorders not by treating the brain, but by treating our human gut bacteria! Check out the “Trust Your Gut” interview.

Folasade P. May, MD, PhD, MPhil, quoted in EveryDay Health on health disparities
Black Americans have a 20 percent higher incidence of colorectal cancer than white Americans and are 40 percent more likely to die of it, according to the American Cancer Society. Dr. May, director of the Melvin and Bren Simon GI Quality Improvement Program, discussed barriers to colorectal cancer screening among Black Americans and understanding this discomfort and mistrust. EveryDay Health also interviewed Gloria Riley, a UCLA African-American patient who had a cancerous polyp removed after her screening colonoscopy.

Enrique Rozengurt, DVM, PhD, AGAF, named among Top 100 Scientists in biology and biochemistry by Research.com
Research.com, a prominent academic platform for scientists, just published the 2022 edition of their Ranking of Top 1000 Scientists in the areas of biology and biochemistry. Their ranking is uses the H-index data gathered by Microsoft Academic and includes only prominent scientists with an H-index of at least 40 for scientific papers published in the fields of biology and biochemistry. Dr. Rozengurt, director of the Digestive Diseases Research Core Center for the Study of Cellular Signaling and Communication (DDRCC-SigCo) and distinguished professor of medicine in the David Geffen School of Medicine at UCLA, ranked: #249 in the United States, #371 in the world and top three at UCLA.

Jennifer Kolb, MD, MS, selected as the new GI associate editor for Foregut Journal
Foregut is the journal of the American Foregut Society (AFS) which is an interdisciplinary society made up of gastroenterologists and surgeons. This journal focuses exclusively on foregut disease, and links medical, endoscopic and surgical disciplines. The editorial board and associate editors include equal numbers of foregut surgeons and gastroenterologists. Dr. Kolb is an interventional endoscopist at the VA Greater Los Angeles Healthcare and David Geffen School of Medicine at UCLA.

Heart Behind the White Coat: Diverse Health Hub interviews Folasade P. May, MD, PhD, MPhil
Dr. May shares how her upbringing influenced her medical career choice on Heart Behind the White Coat (HBWC). Watch as Dr. May explains how her experiences observing medical missions had an impact in her decision to pursue a career in medicine, places where she connects with patients, and her advice for BIPOC students considering the study of medicine. Dr. May is the director of the Melvin and Bren Simon Gastroenterology Quality Improvement Program and assistant professor of medicine.