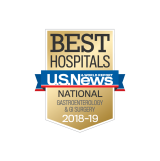 We are pleased and proud to share news that UCLA Gastroenterology and GI Surgery placed No. 7 in the nation for the 2018-19 annual U.S. News & World Report rankings.

We are equally proud that U.S. News recognized our hospitals as No. 7 on the national honor roll.

Taking probiotics after antibiotics may not help
Healthline consulted Dr. Emeran A. Mayer, director of the G. Oppenheimer Center for Neurobiology of Stress and Resilience and co-director of the CURE: Digestive Diseases Research Center at UCLA, in a report on the latest research concerning the prescription of probiotics to curb the negative effects of antibiotics.

Soma Wali, MD, chief of the Department of Medicine at OIive View-UCLA Medical Center, announced Dr. Beaven’s appointment to chief of GI on November 2, 2018. Dr. Beaven attended Stanford University where he majored in mathematics with honors in humanities. He went on to receive his MD from the University of California, San Francisco, and received the Dean’s Research Prize for work he performed in the laboratory of Dr. Scott Friedman under a Howard Hughes Medical Student Research Fellowship. Dr. Beaven completed internal medicine residency training at the Brigham & Women’s Hospital and Harvard Medical School in Boston. He came to UCLA in 2003 as a fellow in digestive diseases where he completed his gastroenterology fellowship. During this period, Dr. Beaven continued his research training and received a PhD with Dr. Peter Tontonoz in the Howard Hughes Medical Institute and Department of Pathology. He then joined the UCLA faculty as a hepatologist and has done extensive research in this area. Dr. Beaven joined the Olive View faculty on a part-time basis two years ago and has been an important part of the division’s clinical and education missions.

$3.5-million grant awarded to UCLA researchers to develop blood-based cancer-screening test
Los Angeles Business Journal, MyNewsLA and LA West Media reported on a $3.5-million grant from the National Institutes of Health to establish a center for the early detection of liver cancer. The team, led by UCLA Jonsson Comprehensive Cancer Center members Dr. Xianghong Jasmine Zhou, Dr. Steven-Huy Han and Dr. Samuel French, is developing an effective and affordable blood-based test. Dr. Zhou is a professor of pathology and laboratory medicine, Dr. Han is a professor of medicine and surgery, and French is an associate professor of pathology and laboratory medicine.

The Medical Nutrition Practice Group expands to include dietitans specializing in GI disorders
Nancee Jaffee, MS, RDN and Janelle Smith, MS, RDN will be active in leading a newly expanded subgroup of the Academy of Nutrition and Dietetics that deals specifically with the dietary component of gastrointestinal disorders. The Dietitians in Gluten and Gastrointestinal Disorders (DIGID) group will work to establish and advance and standards of care in gastrointestinal disorders, work with federal and health agencies in establishing policies beneficial to gastrointestinal disorders patients and develop education materials for patients and professionals. Janelle is chair of the group that initiated expansion of the group and a member of the executive committee of its parent organization. Nancee is leader of the functional bowel disorders workgroup.

What we know about gut brain bacteria and weight loss
Well+Good interviewed Dr. Emeran A. Mayer for a story about the microbiome and its role in metabolism, inflammation and appetite. Dr. Mayer is director of the G. Oppenheimer Center for Neurobiology of Stress and Resilience and co-director of the CURE: Digestive Diseases Research Center at UCLA.

Exploring treatments for irritable bowel syndrome
Healio reported on a presentation by Dr. Lin Chang at the American College of Gastroenterology Annual Scientific Meeting about pharmacologic and non-pharmacologic therapies for irritable bowel syndrome. Dr. Chang is vice-chief of the Vatche and Tamar Manoukian Division of Digestive Diseases and co-director of the G. Oppenheimer Center for Neurobiology of Stress and Resilience.

Gut bacteria is implicated in eating for pleasure
Psych Central, Medical Xpress, Health News Digest, Health Canal, News-Medical.net and Scienmag covered UCLA research identifying a link between metabolites produced by human gut bacteria and eating for pleasure, as opposed to for hunger. A Reddit post about the study was featured on the front page of the Reddit website and has so far received more than 14,000 votes and 700 comments. Dr. Emeran Mayer, director of the G. Oppenheimer Center for Neurobiology of Stress and Resilience and co-director of the CURE: Digestive Diseases Research Center at UCLA, is senior author of the study.

Jill Hoffman, PhD, receives AGA-Takeda Pharmaceuticals Research Scholar Award in IBD
Dr. Hoffman, Center for Inflammatory Bowel Diseases, received the AGA-Takeda Pharmaceuticals Research Scholar Award in Inflammatory Bowel Diseases, which is a three-year career development award that totals $270,000. The objective of the award is to support young gastroenterologists working toward independent and productive research careers in IBD by ensuring that a major portion of their time is protected for research. The award will support young faculty (not fellows) who have demonstrated exceptional promise and have some record of accomplishment in research. The American Gastroenterological Association (AGA) and the AGA Research Foundation awarded 41 investigators with more than $2 million in research funding in the 2018 award year. The awards programs are made possible thanks to generous donors and funders contributing to the AGA Research Foundation. Learn more about the award recipients

Homeless veterans with HCV diagnosed, rreated via PCP
Healio reported on UCLA research presented at DDW 2018 on a project to provide hepatitis C treatment to homeless Veterans. Omar Bakr, MD, is a resident in the UCLA IM training program and part of the May Laboratory team.

Eating beef jerky might be linked to manic episodes in some people
Dr. Emeran A. Mayer, director of the G. Oppenheimer Center for Neurobiology of Stress and Resilience and co-director of the CURE: Digestive Diseases Research Center, commented in a Gizmodo story about research looking at the possible connection between nitrate consumption and manic episodes.

IBD research expands to include brain-gut-microbiome
The Crohn’s and Colitis Foundation of America Inc. awarded Emeran A. Mayer, MD, director of the G. Oppenheimer Center for Neurobiology of Stress and Resilience (CNSR), a three-year grant, with an annual budget of $300,000, to study “brain-gut-microbiome signatures of stress-related IBD symptom flares.” This is the first collaborative effort between Jonathan Jacobs, MD, PhD, Jenny Sauk, MD and CNSR focusing on IBD patients.

Your body has a 'second brain,' and here's how it keeps your butt smart, study says
Dr. Emeran A. Mayer, director of the G. Oppenheimer Center for Neurobiology of Stress and Resilience and co-director of the CURE: Digestive Diseases Research Center, was quoted in a McClatchy News story about the enteric nervous system in humans. The story appeared in the Sacramento Bee, the Modesto Bee, the Charlotte Observer, the Miami Herald, the Fresno Bee and 21 other publications.

Four easy ways to boost your gut bacteria (and why you'd even want to in the first place)
Prevention, in a story about promoting gut health, referenced a UCLA study on probiotics in yogurt and their impact on gut bacteria.

Can changes to our gut bacteria change our behavior?
In a BBC Radio 4 series called The Second Genome, Kirsten Tillisch, MD discussed UCLA’s research into how the microbiome is implicated in the expression of mood, emotion and behavior. Dr. Tillisch, an associate professor of medicine in the Vatche and Tamar Manoukian Division of Digestive Diseases, appears in the “Gateway to the Mind” episode from 19:00-22:14. She also is quoted in a BBC News online article on the same topic, which was syndicated in Huffington Post Mexico.

20 foods that turn back your metabolic clock
An Eat This, Not That! story on nutrition and the metabolic clock referenced UCLA research on the impact of probiotics in yogurt on brain health. Kirsten Tillisch, MD, associate professor of medicine in the Vatche and Tamar Manoukian Division of Digestive Diseases, led the research. MSN also published the story.

Productivity is low in February, here are 5 simple tips to boost it
Dr. Kirsten Tillisch, an associate professor of medicine in the Vatche and Tamar Manoukian Division of Digestive Diseases, discussed her research about the impact of probiotics on brain response in a CNBC story about boosting productivity. The story also ran on Yahoo! Finance.

What's the mind-gut connection and how did it evolve?
Psychiatric Times featured Dr. Emeran A. Mayer, director of the G. Oppenheimer Center for Neurobiology of Stress and Resilience and co-director of the CURE: Digestive Diseases Research Center, in a podcast about the connection between the mind and the gut.

David Padua, MD, PhD, receives Kenneth Rainin Foundation Award - January 2018
The Kenneth Rainin Foundation announced today that it has awarded $1.7 million in grants through its Synergy Awards program. Funding will support teams of researchers who are pursuing collaborative projects aimed at improving the prediction and prevention of Inflammatory Bowel Disease (IBD). “The Rainin Foundation focuses its grants on impacting patient lives, while still maintaining an eye toward discovery science,” said Laura Wilson, PhD, director of Health Strategy and Ventures for the Rainin Foundation. “We want to fund promising ideas from both IBD research and unrelated fields that have the potential to lead to new patient treatments.” The Synergy Awards encourage investigators with differing areas of expertise to pool their talents and resources toward a research goal that would not be possible if they worked independently.

“As an early stage investigator, this type of funding opportunity is critical to me developing a successful scientific career,” said David Padua, MD, PhD, University of California, Los Angeles. “I am looking forward to collaborating with top notch researchers to combine our basic science and clinical translational research toward new discoveries in IBD.” More on the Kenneth Rainin Foundation

UCLA GI physicians mamed 2018 Southern CA Super Doctors
The selection process for Super Doctors is a rigorous multi-step process designed to identify physicians who have attained a high degree of peer recognition and professional achievement. Super Doctors is a selective yet diverse listing of outstanding doctors, representing consumer-oriented medical specialties. Physicians are asked to consider the following question: "If you needed medical care in one of the following specialties, which doctor would you choose?"
Learn more about the selection process 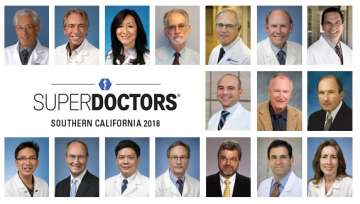 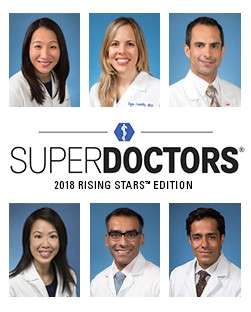 7 types of abdominal pain you shouldn't ignore
In a Today.com story about colitis, Dr. Daniel Hollander explained the types of stomach pains and symptoms that could indicate a serious medical issue. The story was syndicated on MSN. Dr. Hollander is an inflammatory bowel disease specialist and a professor emeritus in the department of medicine.

Scientists are zeroing in on where intuition comes from, biologically
Dr. Emeran A. Mayer, director of the G. Oppenheimer Center for Neurobiology of Stress and Resilience and co-director of the CURE: Digestive Diseases Research Center, was quoted in BigThink about the interactions between the gut and the brain in a story about the root of intuition.

Researchsays exercise also improves your gut bacteria
Healthline published an article about a study examining the impact of exercise on gut bacteria. The article featured the insights of Dr. Emeran A. Mayer, director of the G. Oppenheimer Center for Neurobiology of Stress and Resilience and co-director of the CURE: Digestive Diseases Research.

An integrative approach for IBS relief
Dr. Emeran A. Mayer, director of the G. Oppenheimer Center for Neurobiology of Stress and Resilience and co-director of the CURE: Digestive Diseases Research, was quote in an Experience Life story on IBS relief and the gut-brain process.