The craniosynostosis program at UCLA has a long tradition of excellence and is responsible for training many of the current leaders in the field. Since the inception of the multi-disciplinary craniofacial clinic in 1972, we have defined the standard of care for the treatment of craniofacial abnormalities. We have an impeccable track-record of superior cognitive and cosmetic outcomes with no mortalities or serious infections. 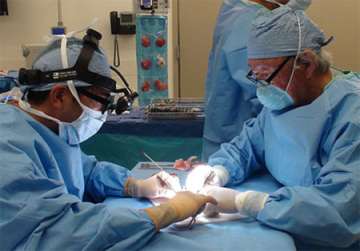 Our Pediatric Neurosurgeons both have extensive fellowship-training and expertise from the most common to the most rare types of craniofacial surgery. Similarly, the Craniofacial Surgeons in the UCLA Division of Plastic & Reconstructive Surgery are all board-certified in plastic surgery and fellowship trained in craniofacial surgery—all three of them completed their fellowship training at UCLA and were trained by Henry K. Kawamoto, MD, DDS, one of the ground-breaking surgeons who helped create and refine many of the surgical techniques used to correct craniofacial deformities.

Our surgeons work in close collaboration with the UCLA Craniofacial Clinic to develop a comprehensive and individualized treatment plan for each of our patients. The clinic utilizes a team approach to provide patients with individualized care. The clinic brings together neurosurgeons, plastic surgeons, oral surgeons, head and neck surgeons, medical geneticists, ophthalmologists, orthodontists, otolaryngologists, pediatricians, audiologists and speech pathologists to develop a comprehensive and coordinated treatment plan for each patient. The program also serves as a regional center for the southwestern United States.

The most common indications for craniofacial surgery are: 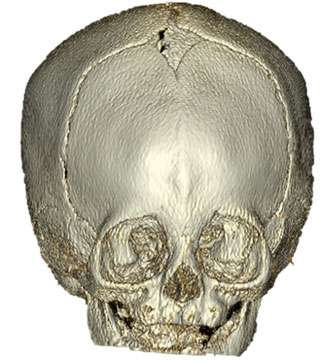 Craniosynostosis is the premature closure or one or more gaps between the growing bones of the skull. This condition may be present at birth or may be discovered shortly after birth. For some babies, this can be more subtle and an experienced craniofacial plastic surgeon and/or a pediatric neurosurgeon is required to make the diagnosis. The most common form involves the sagittal suture (sagittal craniosynostosis), and is characterized by a long, narrow head (scaphocephaly or dolichocephaly), with ridging over the sagittal suture. Less common are coronal craniosynostosis, characterized by asymmetry of the forehead and orbits, and metopic craniosynostosis, in which there is a triangular appearance to the forehead with ridging in the middle of the forehead over the metopic suture.

How common is Craniosynostosis?

Craniosynostosis is estimated to affect one out of every 2500 births.

Are there genetic links to Craniosynostosis?

Do you perform minimally invasive endoscopic surgery for craniosynostosis?

Yes. We perform minimally invasive endoscopically assisted surgery for selected infants with sagittal or metopic synostosis and this is supplemented by the use of helmets after surgery. The children have much smaller scalp incisions, experience less blood loss and tolerate this surgery exceptionally well. This option is used especially in very young infants. Not all infants may be a good candidate for this procedure.

What are several common types of Craniosynostosis? 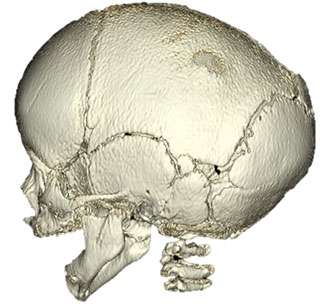 Sagittal Craniosynostosis
Sagittal synostosis is the premature closure of the sagittal suture that is located on the top of the head, running from front to back. A ridge on the top of the head can usually be felt through the scalp. When this suture closes early, the baby begins to have an elongation of the head from front to back (scaphocephaly) with narrowing of the temple region (bitemporal narrowing). Some babies will develop a prominent forehead (also called frontal bossing).

Bilateral Coronal Synostosis
When both coronal sutures are affected, a ridge can be felt on both sides of the head running from the top of the skull down the sides in front of the ears. Depending how early this is discovered, the forehead will appear flat. This will, in turn, make the eyes appear as if they are sticking out. The head will appear taller and wider than usual.

Lambdoidal Synostosis
There are two lambdoidal sutures in the skull, which meet in the back of the head in an upside down configuration. This is the rarest form of craniosynostosis and comprises only one percent of all cases. It is important to differentiate this condition from positional plagiocephaly which is quite common and typically does not require surgical correction. 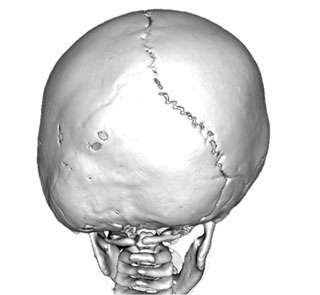 Is surgery necessary for Craniosynostosis?

How dangerous is surgery for Craniosynostosis?

At UCLA, there have been no mortalities or serious infections after surgical procedures for craniosynostosis, attesting not only to the expertise of the surgeons, but of the entire team, including the pediatric anesthesiologists. Except for the most complex craniofacial syndromic cases, children are generally are discharged within 72 hours of surgery.