What is an arteriovenous malformation?

Arteriovenous malformations (AVMs) are defects of the brain’s circulatory system that are generally believed to arise during embryonic or fetal development. Normally, oxygenated blood is pumped by the heart through branching tubes called arteries to the brain, where it enters a fine network of tiny vessels called capillaries. It is in these capillary beds where the blood nourishes the tissues. The "used" (deoxygenated) blood then passes back to the heart through branching thin walled tubes called veins (figure 1). 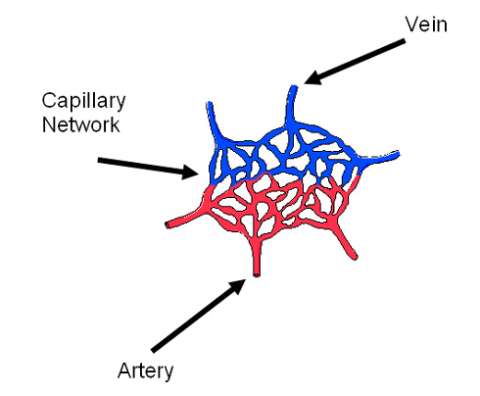 The arteries have high pressure as the blood is pumped directly into arteries by the powerful beating heart muscle. The veins have low pressure due to the fact that the arteries divide into hundreds of capillaries that dissipate the pressure. An analogy would be similar to a fast flowing river (similar to an artery) flowing into a very large lake (similar to capillaries). Although the river is flowing fast and furious, the very large lake is still and calm. So as the capillaries dissipate the pressure, the veins have low pressure. This drop in pressure occurs along all arterial venous connections. Arteries have thick walls to handle the very high pressures and the veins have thin walls as they only have to withstand low pressures.

AVMs are essentially faulty connections between arteries and veins (figure 2). In an AVM the capillaries are missing. Instead of the capillaries, much larger sized blood vessels connect the artery directly to the vein. These connections that replace the capillary are called shunts and a collection of shunts is called a nidus. The consequence of this is that the very high pressure in the arteries is no longer dampened by the capillaries and the veins now experience the same high pressure as the arteries. The veins as stated above are thin walled and the high arterial pressure can rupture the veins resulting in bleeding in the brain called a hemorrhagic stroke. 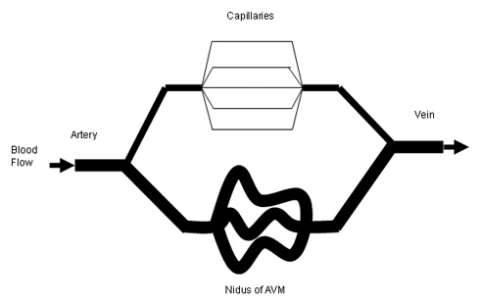 Figure 2. Normal arteriovenous connection is depicted in the figure on top with arteries leading to capillaries then to veins. On the bottom, an AVM is depicted with large sized shunts connecting the artery to the vein. In this diagram three shunts are depicted. The collection of shunts is called the nidus of the AVM. In reality, in an AVM, hundreds of shunts connect the artery to the vein.

What causes an AVM to develop in the fetus?

It is not known how AVMs develop. Most of the AVM are thought to develop before birth. It typically does not cause any problems in the fetus or newborn, even though rarely some AVMs rupture and cause brain hemorrhage early on. It does not appear in relatives of patients with AVMs. It occurs with about equal frequency in men and women AVMs are believed to be hereditary, however there are no recommendations for screening for it. About 0.14% of the U.S. population has AVMs. Given a population now of about 318,000,000 in the United States, that makes about 445,000 people in the country with AVMs.

What are risks associated with AVMs?

As described above, AVMs are direct connections between arteries and veins without an intervening capillary system. As a result, the veins are under high pressure and can bleed. Unfortunately most people discover that they have an AVM when they bleed and therefore suffer brain hemorrhage (hemorrhagic stroke). AVMs can also cause seizures or neurological symptoms such as weakness, numbness in the body, vision changes or speech problems. It is estimated that the life time risk of bleeding from AVMs is in excess of 50%. This is a significant risk particularly that each bleed has a 1 in 10 chance of causing death and if you survive the bleed there is a more than 50% chance of causing disability. For these reasons aggressive treatment of AVMs is undertaken to eliminate these risks.

How is an AVM diagnosed? What are symptoms of an AVM?

Many patients with AVMs have no symptoms. Some patients may have seizures or persistent headaches related to the AVM. However, most AVMs, as stated above, come to attention due to bleeding. This bleeding in the brain causes a severe headache that is rather sudden in onset and is typically associated with nausea and vomiting. Patients with bleeding in the brain may also lose consciousness. Patient with bleeding is evaluated typically with a CT scan. Once bleeding is confirmed on a CT scan, definitive diagnosis of an AVM is made by angiography. Figure 3 shows the typical appearance of an AVM on angiography. MRI is also very helpful particularly with localizing the AVM. Once the location and appearance of the AVM is decided, definitive plans for treatment are made.

Figure 3. The AVM is seen as a dense collection of vessels (the nidus) that connect the arteries directly to the veins without an intervening capillary system. Next is a picture depicting approximate location of this AVM in the brain. Red arteries bring oxygenated, high pressure blood to the AVM nidus. Blue veins drain blood from the AVM. Arrows indicate direction of the blood flow.

How is an AVM treated?

There are currently three treatment options for AVMs. These include surgery, neuroendovascular embolization and radiation. Typically if an AVM is amenable to surgery, then this is the preferred method. Once the AVM is removed surgically, it immediately removes the risk of rupture and bleeding. For AVMs that are not treatable by surgery, then radiation is usually the method of choice. The disadvantage of radiation is that it takes time for the radiation to damage the AVM nidus and cause it to shrink and scar down. This process typically takes 2 to 3 years. So radiation is a gradual cure of the AVM over several years and during this waiting period the patient is still at risk for bleeding. In addition, radiation only works best with small AVMs and does not work as well with large AVMs. Any AVM smaller than 3 centimeters in greatest diameter is considered small.

Embolization is a procedure to block abnormal blood vessels in the nidus of the AVM. In other words, the shunts in the nidus are blocked one by one during the embolization procedure. This is an angiogram based procedure and not a surgical procedure. It is referred to as a minimally invasive procedure, as unlike surgery, no cutting in the head or skull or manipulation of the brain is involved. Instead, a small plastic tube called a catheter is introduced into the femoral artery in the upper thigh/groin area (Figure 4). From this artery the catheter is carefully navigated into the brain and specifically into the arteries in the brain that are the shunts of the AVM. Then these shunts are occluded by injection through this catheter of agents that block the blood vessels. These shunts are abnormal blood vessels that do not supply normal brain and simply serve as a conduit between the artery and the vein and therefore their blockage will not be of any consequence in the patient. 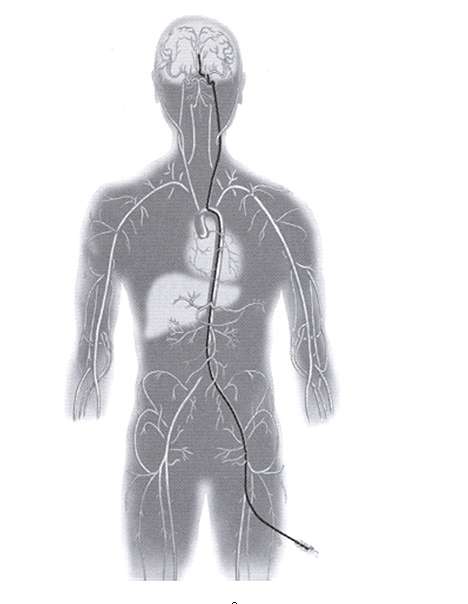 What is the role of embolization in treatment of AVMs?

Embolization is rarely curative on its own. It usually does not replace surgery or radiations which are needed to completely cure the AVM. The embolization procedure is very helpful when performed before surgery or radiation. For instance, before surgery, embolization is useful as it blocks the shunts, so that there isn't as much bleeding during surgery. Prior to radiation, by blocking the shunts, the size of the AVM can be reduced and hence the area that has to be radiated is smaller. The smaller the area radiated the less chance that the radiation can damage the brain tissue around the AVM.

What happens during an embolization procedure?

Patients undergoing embolization procedure at our institution are placed under general anesthesia. This means that the patient will be completely unconscious during the procedure. The embolization procedure is performed as described above. The patient is then awakened after the procedure and will spend one night in the hospital for observation. Patients are then discharged home the next day. We would recommend one additional day of rest at home prior to resuming normal pre-procedure activities. Sometimes, due to the size of the AVM, several embolization sessions are necessary. Each session would be performed separately perhaps separated by days or one or two weeks and each session would proceed as described above with one night stay at the hospital. 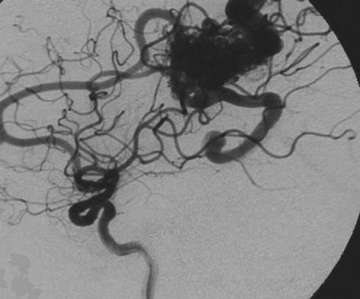 Figure 5. Before Treatment: the AVM is seen as a dense collection of vessels (the nidus). 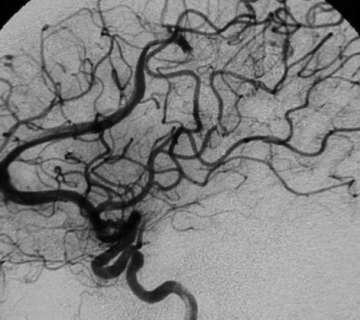 Figure 6. After Treatment: the AVM is cleared -- restoring normal circulation.

What are side effects from the embolization procedure?

The most common side effects from an embolization procedure are related to the effects of the general anesthesia. This includes drowsiness, nausea, vomiting, decreased appetite and urinary retention and constipation. Most if not all these side effect resolve within 24 to at most 48 hours and in fact patients are essentially back to baseline by the time they are discharged home the next day. At home recovery is rapid and most patients report feeling "normal" as early as one or two days after the procedure.

What are activities to avoid if I have an AVM?

There is no known activity that has shown to protect or cause a bleed in an AVM patient.

Are there support groups for AVM patients?