What is an aneurysm?

An aneurysm is an abnormal saccular or diffuse dilatation of an artery (Figure 1).

How common are aneurysms?

Its overall prevalence is about 4-5% in the general population. There is a clear female preponderance ranging from 54 -61%. Approximately 20-30% of patients will have multiple aneurysms.

The recommendation regarding screening for aneurysms is that if two or more first degree relatives have an aneurysm, one should be screened. The best screening tool is non-invasive imaging with MRI or with CT angiogram. In general, aneurysms rarely occur in more than one family member. When aneurysms are present in more than one family member a known hereditary syndrome is often present, such as polycystic kidney disease, Ehler-Danlos syndrome, pseudxanthoma elasticum.

What is the risk of bleeding from aneurysms?

For an aneurysm that has not bled, the risk of rupture appears to be related to its size and location. With respect to size, aneurysms smaller than 7 mm have a benign natural history. Larger aneurysms have greater risk of bleeding. The location of the aneurysm is also important. Even if an aneurysm is less than 7mm, in certain locations in the brain, it may have a high risk of bleeding. In deciding on treatment, both factors are taken into consideration in the evaluation process.

What are symptoms of an aneurysm?

If an aneurysm has not bled, there may not be any symptoms and the first time the patient learns that they have an aneurysm is when they have a bleed.

If an aneurysm bleeds the symptoms are as follows: sudden severe headaches, neck stiffness, nausea and vomiting. Sometimes patients may even have stroke like symptoms such as weakness, double vision, blindness in part of the vision, confusion or loss of consciousness.

How is an aneurysm diagnosed?

An aneurysm that has not bled is typically discovered on a CT or MRI scan (Figure 2) that is being done for evaluation of problems that may be unrelated to the aneurysm. If an aneurysm is discovered in this manner it is referred to as an 'incidental aneurysm.' 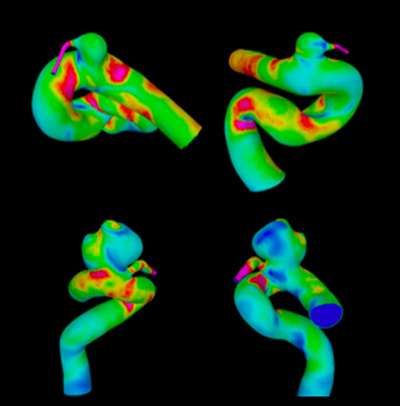 If an aneurysm bleeds, then CT scan is typically done to confirm the bleed and for evaluation of the aneurysm the best diagnostic tool available currently is a catheter angiogram.

How are aneurysms treated?

The modern treatment of aneurysms include surgical clipping, endovascular coiling, floater diversion, vessel sacrifice and observation of the aneurysm. (Figures 3, 4, and 5). The selection of therapy depends upon multiple factors including patient's age, disease state, medical conditions, aneurysm size and location. 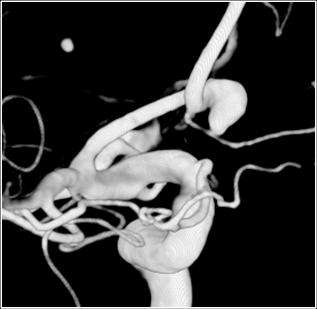 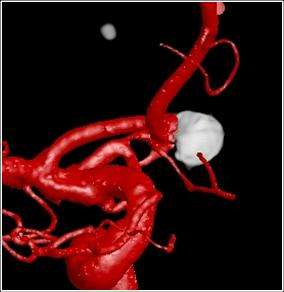 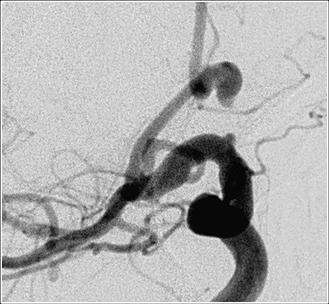 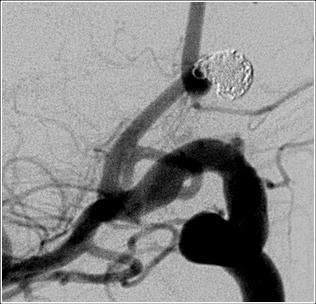 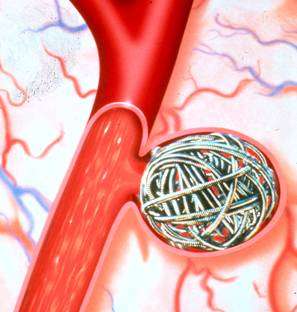 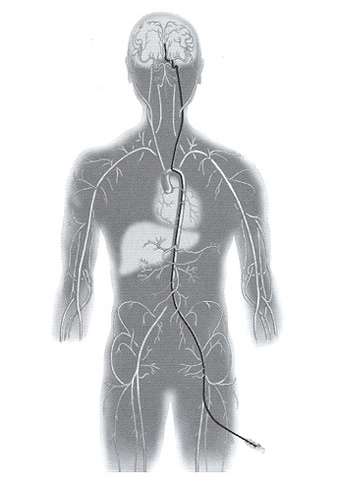 Figure 6. The catheter is carefully threaded up into the brain. 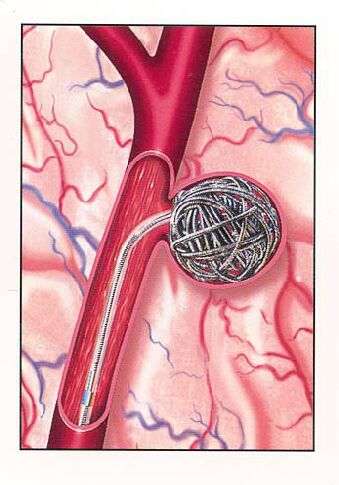 Figure 7. Endovascular occlusion of aneurysms includes the use of detachable coils.

This technique of treating aneurysms with coils was invented at UCLA in 1990 and the first patient in the world was treated here in 1991. Since then, more than 1300 patients have been treated with this technique at UCLA.

Four hundred and twenty patients harboring small incidental aneurysms are being followed up with CTA every 6 months/year looking for aneurysm anatomical and/or morphological changes as sign of impending rupture.

UCLA’s Division of Interventional Neuroradiology is participating in a multi-center U.S. clinical trial to evaluate the safety and efficacy of the MicroVention, Inc. Flow Re-Direction Endoluminal Device Stent System (FRED™) for the treatment of intracranial aneurysms.

The prospective study aims to answer key questions on use of the FRED stenting system for wide-necked or large intracranial aneurysms. While treatment of these types of aneurysms has been particularly vexing, the new stenting system holds the promise of improved clinical outcomes and fewer procedure-related complications.

For more information about the trial please visit: