Carotid and Intracranial Atherosclerosis and Angioplasty and Stenting at UCLA 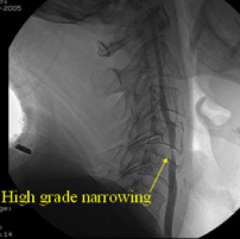 Figure 1. Narrowing of carotid artery in the neck

What is Atherosclerosis and how does it occur?

This is commonly referred to as "hardening of the arteries". It is actually a complex process of deposition of cholesterol and inflammation that leads to narrowing of a blood vessel (Figure 1) and/or a predisposition to blood clot formation. The main risk factors for development of atherosclerosis are elevated cholesterol, high blood pressure, smoking, diabetes, and genetics. This can occur anywhere in the body's blood vessels. It commonly occurs in the main arteries of the neck going to the brain (as shown in figure 1), which are called the carotid arteries. It can also occur in the blood vessels of the brain itself, and then it is called intracranial atherosclerosis. In both locations, strokes and TIAs can occur. 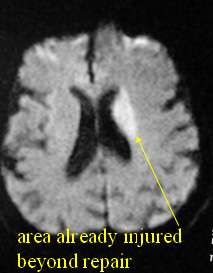 What is a stroke and transient ischemic attack (TIA)?

When there is damage to the brain by rupture of a vessel, it is called a hemorrhagic (bleeding) stroke. When it is caused by a blood clot or atherosclerotic narrowing leading to blockage of a blood vessel, then it is called an ischemic (lack of blood flow) stroke. A stroke is an injury to the brain that causes a permanent loss of function (Figure 2). Typical ischemic stroke symptoms are loss of sensation or strength, typically on one side (face, arm and/or leg), loss of vision, garbled speech or inability to understand speech, or loss of balance. If these symptoms are short lived (less than a few minutes), it is called a transient ischemic attack (TIA) in contrast to a stroke which results in permanent loss of function. A TIA is sometimes referred to as a mini stroke. But there is nothing trivial about it as the name may imply. Rather it is a warning sign for a possible large stroke forthcoming. The risk of subsequent stroke is 10 times higher after a TIA and in fact this is an opportunity to intervene, identify the cause of the TIA, treat the cause of the TIA and prevent a future stroke. Stroke and TIA are both emergencies requiring urgent evaluation, work up and treatment.

Atherosclerotic narrowing of the neck or intracranial arteries can lead to stroke or TIA. Treatment of blood vessel narrowing is aimed at eliminating the risk of future stroke. This is discussed in the next section.

Treatment of blood vessel narrowing in the neck or in the brain: angioplasty and stenting procedure

Before a stroke has occurred, we can open up the artery that is narrowed by angioplasty and stenting, open it up by surgery, and/or give medications to reduce the risk of stroke. Blood vessels in the neck or in the brain can be treated to prevent a future stroke and these are discussed separately below.

Treatment of blood vessel atherosclerotic narrowing in the neck:

In the carotid vessel, carotid endarterectomy has been the gold standard for atherosclerotic disease. This involves an operation where the surgeon opens the vessel and removes the plaque that is causing the narrowing and/or blood clotting. Recently, angioplasty and stenting has been used successfully in the carotid artery, especially in patients who have reason to be at higher risk for surgery. 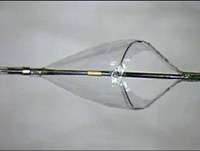 Figure 3. Example of a filter

The angioplasty and stenting is done through the artery in the groin, guiding up the devices inside the blood vessels to the neck. First, a filter device (Figures 3) is placed through the narrowed area to capture any debris loosened by the procedure. Then a balloon in placed and inflated to open up the artery partway. Then an expandable metallic cage (stent) is placed across the narrowed area. This expands to further open the blood vessel. After completion of the procedure the filter that has entrapped possible debris is removed and the artery in the groin is closed with a tiny device that plugs up the hole in the vessel.

Treatment of blood vessel atherosclerotic narrowing in the brain:

This procedure is similar to the carotid stenting, but deals with much smaller vessels inside the brain. This procedure is reserved for patients who are having symptoms (stroke or TIA) while already on medical therapy. Patients that are not responding to medicine and have narrowing of blood vessel in the brain as the causative factor are seen and evaluated by a multidisciplinary team of stroke specialists. Assessment is made as to whether they qualify for angioplasty and stenting of the artery in the brain. If so then the procedure is done similar to angioplasty and stenting described above. An overnight stay is required.