Vascular Anatomy of the Breast

The breast is a large exocrine organ made up of skin, adipose, glandular parenchyma, and stroma. Within the stroma is a complex network of arteries and veins. Arterial supply to the breast is primarily from the internal thoracic (internal mammary) artery (medial and central breast), lateral thoracic artery (superolateral breast), and intercostal arteries (deep/posterior breast), with minor contributions from the thoracoacromial, subscapular, and thoracodorsal arteries that also supply a portion of the superior breast. Venous drainage of the breast is typically via a meshwork of valveless veins with anastomotic plexi that allow redundancy of venous outflow. The veins of the deep breast parallel that of the arteries and have comparable nomenclature, while the veins of the superficial breast have variable anatomy and do not typically accompany arteries (Figure 1). 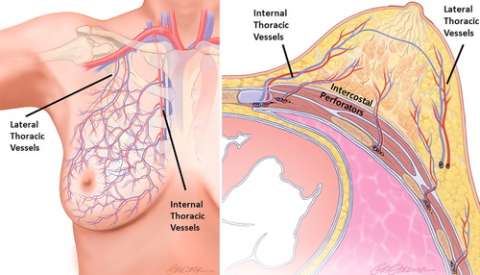 Vascularity of the breast is influenced by several factors including age, menstrual cycle, sexual arousal, and vasoactive medications. Blood flow is elevated in certain physiologic states, such as with pregnancy or lactation, larger parenchymal volume, or in women of premenopausal status, with the highest concentration of blood vessels in the nipple. In general, any asymmetry of the breast vascularity—especially assessed by contrast-enhanced MRI—indicates underlying pathology and warrants further evaluation, as it may be a potential marker for malignancy. Fortunately, most primary vascular breast pathologies are rare and can be reduced to a narrow differential diagnosis conveniently grouped into three categories: arterial, venous, or mixed arteriovenous, each of which can be further subdivided into symmetric (bilateral) or asymmetric (unilateral) disease (Figure 2). The remainder of this article will discuss three of the more common, and clinically relevant, vascular pathologies encountered in breast imaging, with accompanying illustrative example cases.

Superficial thrombophlebitis of the breast, or Mondor disease, is a superficial veno-occlusive disease most commonly involving the thoracoepigastric, lateral thoracic, or superior epigastric veins of the upper outer or upper inner quadrants, or inferior breast and chest wall. The clinical presentation varies with acuity, ranging from incidental and asymptomatic, to a focally painful palpable “cord” with associated yellowish or purplish skin discoloration and/or skin retraction or dimpling. The condition most often affects women in their third to sixth decade of life (75%) but can also occur in men. Causative factors are shared with other common causes of thrombophlebitis outside of the breast, and include trauma, post biopsy/surgery, botulinum toxin or other injections, pregnancy, breast cancer, and other hypercoagulable states. However, the majority of cases of Mondor disease are idiopathic. Ultrasound is the gold standard in diagnosis, which classically shows a noncompressible hypo- or anechoic superficial tubular or beaded structure, occasionally with demonstrable wall thickening and inflammatory changes (Figure 3A-B). Color Doppler shows minimal to no flow. Chronic thrombosis may result in vascular calcification, which may be seen as hyperechoic intraluminal foci with posterior shadowing or comet tail artifact. The disease course is often self-limited, with most cases resolving spontaneously over 2-12 weeks. Treatment is supportive with over-the-counter analgesics (e.g., ibuprofen, acetaminophen) as needed for pain. Importantly, there is no role for antibiotics or anticoagulation therapy, as Mondor disease is not infectious in origin and by definition does not involve the deep venous system. 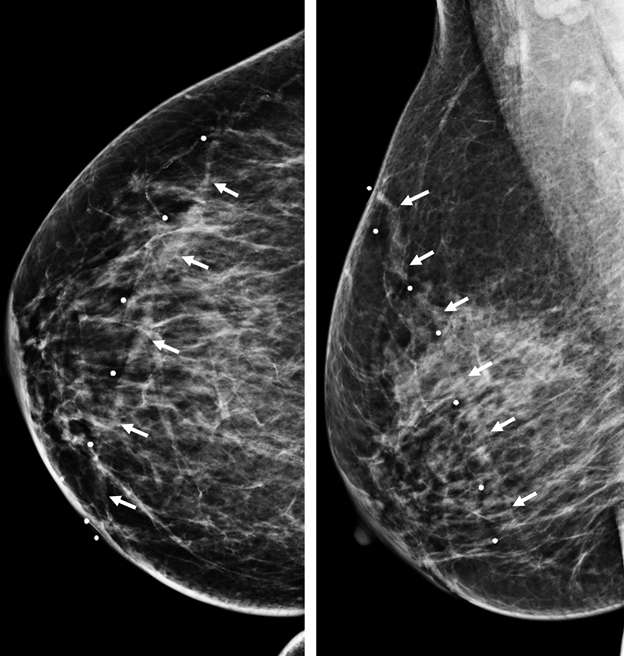 Figure 3A: Superficial thrombophlebitis. Mammographic CC (left) and MLO (right) views of the right breast in a 65-year-old woman with a cord-like palpable abnormality show a dilated, noncalcified vessel spanning all quadrants breast as highlighted by the 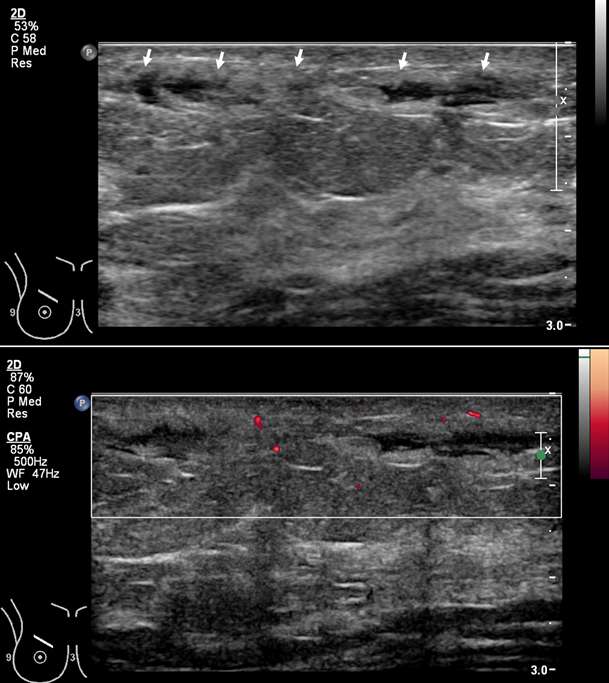 Figure 3B: Superficial thrombophlebitis. Grayscale (top) and power Doppler (bottom) sonography in the same patient shows a dilated and irregular tubular structure with adjacent wall thickening and inflammation (arrows) over the superficial/anterior upper

Arteriovenous malformations of the breast are rare. Most cases of breast AVMs are acquired or iatrogenic, either secondary to trauma or following biopsy or surgery. Congenital breast AVMs of are an exceedingly rare clinical entity usually seen in association with other systemic vascular anomalies as part of a syndromic vascular malformation disorder. Initially, a breast AVM may be detected by screening mammography as a nonspecific focal asymmetry or mass, which may trigger subsequent diagnostic breast imaging. The diagnosis can be readily made by duplex ultrasonography as a high-flow complex vascular mass with one or more feeding vessels and a draining vein (Figure 4), with CT or MRI usually reserved for preoperative planning purposes or equivocal cases. Presence of slow or no Doppler flow is more likely to represent a venous/venolymphatic malformation or primary vascular tumor rather than AVM. Treatment is achieved either by endovascular or surgical means. However, there is a paucity of literature on the appropriate management, and no guideline currently exists as the gold standard of care. Therefore, patients with breast AVMs should be evaluated by a multidisciplinary team at a center with a dedicated vascular malformations practice. 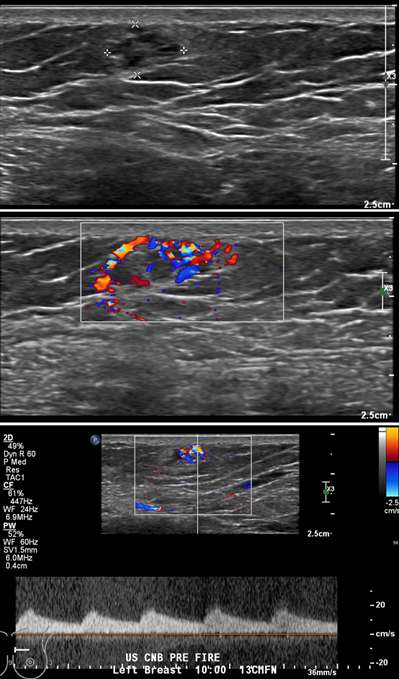 Figure 4A: Arteriovenous malformation. A 43 year-old woman presented for diagnostic left breast sonography after a focal asymmetry was seen in the upper inner quadrant of the left breast on routine screening mammography. Greyscale (top) and color Doppler 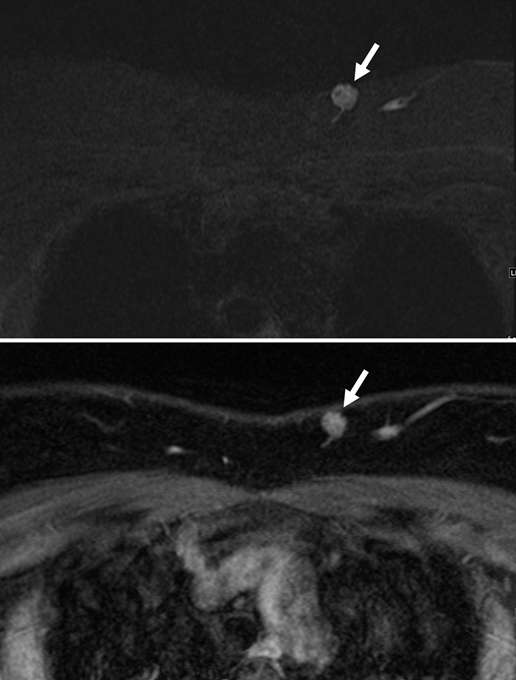 False aneurysm, or pseudoaneurysm, of the breast may be post-traumatic (blunt or penetrating), iatrogenic (e.g., post-biopsy, post-surgery), spontaneous (secondary to hemorrhage in the setting of coagulopathies or uncontrolled hypertension), or from vascular invasion by breast malignancy. The diagnosis of a breast pseudoaneurysm, if superficial, can often be made clinically by the presence of an expanding palpable, pulsatile mass on physcial exam. However, Doppler ultrasonography is the gold standard for confirming the diagnosis and characterizing the lesion for subsequent treatment planning (Figure 5). In the setting of acute trauma, breast and axillary pseudoaneurysms are usually identified radiographically during a trauma CT scan. Prompt treatment of pseudoaneurysms, especially if enlarging, is recommended in order to prevent clinically significant hemorrhage and rupture. The choice of therapy is guided by both clinical factors and imaging features, but generally involves an initial trial of manual external compression. This can be performed using an ultrasound probe, which allows the clinician to monitor treatment progress under real time visualization. More invasive intervention is warranted if there is persistent filling of the pseudoaneurysm sac, usually done in a step-wise fashion of increasing invasiveness. The first-line therapy is ultrasound-guided direct thrombin injection, which is only performed for pseudoaneurysms with features of a narrow (and preferably long) communication to the native artery origin (i.e., narrow "neck"). Thrombin injection is performed by slowly injecting a small volume of concentrated thrombin solution via direct needle puncture under constant ultrasound visualization. The procedure is well tolerated, however, there is a risk of distal embolization/migration which can lead to arterial thrombosis and ischemia; thus, thrombin injection should only be performed for pseudoaneurysms with a confidently seen narrow neck. Second-line therapies include endovascular treatment and surgical repair. Endovascular treatment is accomplished either via transarterial embolization of the sac using vascular coils and/or liquid embolic material, or by deploying a covered arterial stent across the pseudoaneurysm, thereby excluding the sac from arterial inflow. The latter is less preferable, as it requires post-treatment anticoagulation to mitigate the risk of in-stent thrombosis and stenosis. Surgical repair is generally reserved for refractory pseudoaneurysms or those with unfavorable anatomy. The operation is performed by surgically ligating across the pseudoaneurysm supply and resecting or evacuating the sac hematoma. 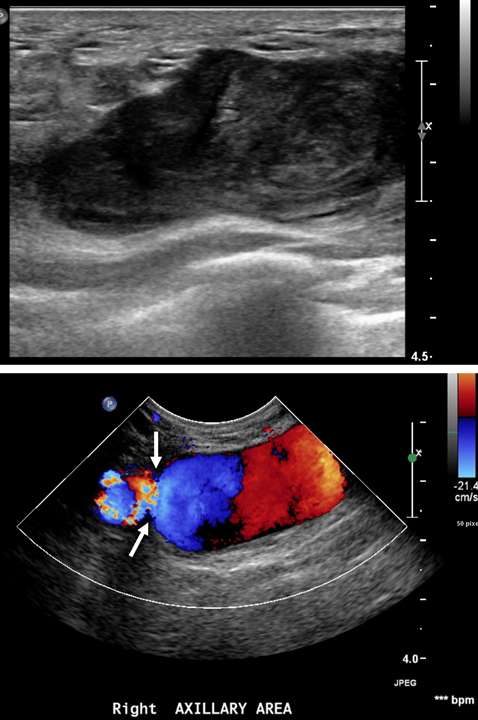 Figure 5A: Pseudoaneurysm. A 55-year-old woman who recently underwent ultrasound-guided biopsy of a right upper outer quadrant breast mass was noted to have an expanding hematoma on physical exam. Greyscale (top) and color Doppler (bottom) ultrasonography

Figure 5B: Pseudoaneurysm. Pre-treatment selective catheter-directed digital subtraction angiography (left, middle) in the interventional suite confirmed the presence of a large pseudoaneurysm (arrows) fed by a branch of the right axillary artery. Post-tr 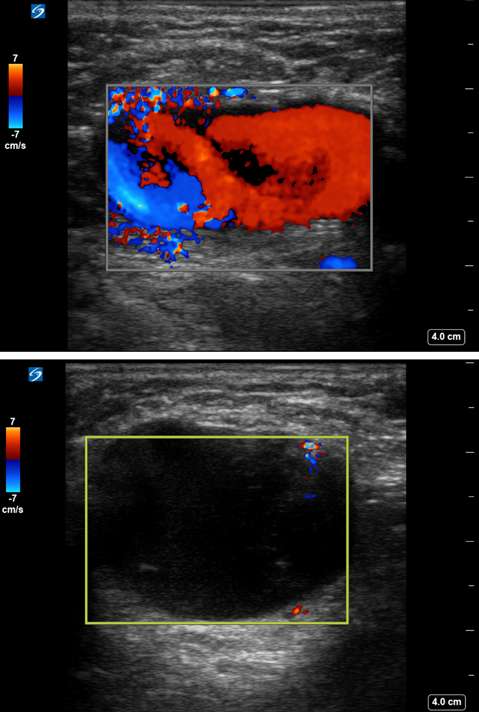 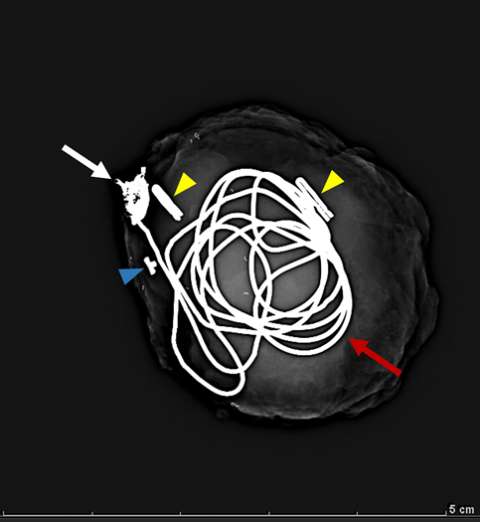