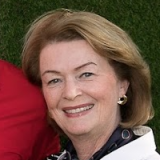 Beth, a proud mother of three children and grandmother of four, was raised in the suburbs of Portland, Oregon. In August 1972, shortly after graduating from Seattle University with a degree in Community Services, Beth married Pete Chiarelli. Little did she know that for the next 40 years, she would assume the supportive role to a career army officer.

During Pete’s time in the Army, the Chiarelli’s moved no less than twenty-nine times, both nationally and internationally. Beth viewed each moved as a new adventure for her growing family and for herself. She enjoyed creating each new home and developing new friendships, in addition to curating her love of antiques along the way.

Beth has always been a passionate advocate on behalf of military children, and in 2000, joined the Military Child Education Coalition (MCEC) as a National Advisor. The MCEC mission is to ensure quality education opportunities for all military connected children, addressing academic, social and emotional needs. She is an active member of the Sunset Club which supports local charitable and civil causes.

In January 2012, after Pete’s retirement from the Army, the Chiarelli’s returned to Seattle, Washington, which they now call home. Beth enjoys a spirted game of bridge and a challenging round of golf. Peter (oldest son) and family live in Los Angeles. Erin (middle daughter) and family live in Plano, Texas. Patrick (youngest) and his wife live in Seattle Washington.