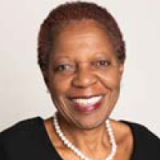 Coretta Harris was born and raised in Richmond, California.  She graduated from UCLA in 1983 with a degree in Engineering with an emphasis in Mechanical Engineering.

Coretta began her career working as a Mechanical Engineer for the Navy, conducting (planning, preparing and directing) environmental testing of some of the Navy’s missiles, including Sparrow, Sidewinder and Tomahawk.  Following her stint with the Navy, Coretta worked for several military contractors as a Mechanical or Systems Engineer on a variety of Navy, Air Force and Army programs. Her work focused on the front-end development requirements for programs including Defense Support Program (DSP), Ares and F-135 Fuel Burn Reduction (FBR).  Prior to retiring Coretta led accident investigations for United and Delta engines as a Systems Engineer for Pratt Whitney.

In 2016, after 33 years working primarily in the Aerospace Industry, Coretta attempted to retire, excited to spend more time on her volunteer work.  In 2018, while minding her own business, Coretta was approached by former co-workers to assist with a short-term project as a contractor, “cleaning up” requirements on the Propulsion System for Boeing CST-100 Starliner.  After her one-year contract ended, Coretta returned home to once again mind her own business and focus completely on her volunteer work; however, less than two months later, she was recruited by ManTech International (El Segundo, CA) as a Systems Engineer, Senior Principal, to work on the Vulcan Program (Atlas rocket replacement). “Permanent retirement” from ManTech International is on the horizon.

Coretta lives in Inglewood, California. Her gated community’s nextdoor neighbor is the new SoFi Stadium, located on the site of the former Hollywood Park racetrack.