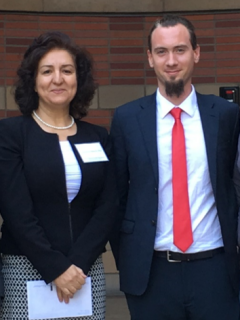 "Background: RNA-binding proteins are master orchestrators of gene expression regulation. They regulate hundreds of transcripts at once by recognizing specific motifs. Thus, characterizing RNA-binding proteins targets is critical to harvest their full therapeutic potential. However, such investigation has often been restricted to a few RNA-binding protein targets, limiting our understanding of their function. In cancer, the RNA-binding protein HNRNPA2B1 (heterogeneous nuclear ribonucleoprotein A2B1; A2B1) promotes the pro-proliferative/anti-apoptotic phenotype. The same phenotype in pulmonary arterial smooth muscle cells (PASMCs) is responsible for the development of pulmonary arterial hypertension (PAH). However, A2B1 function has never been investigated in PAH.

Method: Through the integration of computational and experimental biology, the authors investigated the role of A2B1 in human PAH-PASMC. Bioinformatics and RNA sequencing allowed them to investigate the transcriptome-wide function of A2B1, and RNA immunoprecipitation and A2B1 silencing experiments allowed them to decipher the intricate molecular mechanism at play. In addition, they performed a preclinical trial in the monocrotaline-induced pulmonary hypertension rat model to investigate the relevance of A2B1 inhibition in mitigating pulmonary hypertension severity.

Results: They found that A2B1 expression and its nuclear localization are increased in human PAH-PASMC. Using bioinformatics, they identified 3 known motifs of A2B1 and all mRNAs carrying them. In PAH-PASMC, they demonstrated the complementary nonredundant function of A2B1 motifs because all motifs are implicated in different aspects of the cell cycle. In addition, they showed that in PAH-PASMC, A2B1 promotes the expression of its targets. A2B1 silencing in PAH-PASMC led to a decrease of all tested mRNAs carrying an A2B1 motif and a concomitant decrease in proliferation and resistance to apoptosis. Last, in vivo A2B1 inhibition in the lungs rescued pulmonary hypertension in rats.

Conclusions: Through the integration of computational and experimental biology, the study revealed the role of A2B1 as a master orchestrator of the PAH-PASMC phenotype and its relevance as a therapeutic target in PAH."