Our expert neurosurgery team is committed to providing the finest and most comprehensive patient care. For help finding a neurosurgeon, call 310-825-5111.

Chiari malformation is a general term used to describe a condition when the bottom part of the cerebellum (the “tonsils”) dip down into the upper spinal canal. 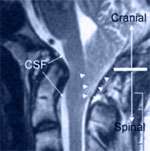 (Figure legend: MRI image of the base of the brain showing the cerebellar tonsil (outlined by the six arrowheads) below the base of the skull. Note that there is no open connection between the cerebrospinal fluid (CSF) in the cranial (brain) compartment and the spinal compartment).

What causes a Chiari malformation